Co-Production Designer on Under The Boardwalk

Chris Zibach is an animator who spent many years at DreamWorks, and was recently promoted to Production Designer on Paramount Animation’s upcoming musical film UNDER THE BOARDWALK. During his time at DreamWorks, Chris worked on feature films including CAPTAIN UNDERPANTS: THE FIRST EPIC MOVIE and RISE OF THE GUARDIANS, as well as short films in the KUNG FU PANDA and SHREK universes. Chris’s credits in television also include the HOW TO TRAIN YOUR DRAGON spin-off tv show “DreamWorks Dragons,” and Guillermo Del Torro’s “Trollhunters: Legends of Arcadia.” He is the son of the prolific production designer/animator Raymond Zibach, who production designed all three KUNG FU PANDA movies as well as SINBAD.

Seek out and fill a vacuum you see in the world. Be confident that only you need to be a fan of your own work.

Chris Zibach
Talking to his younger self

1. What is your job at Paramount Animation?

2. Who is the artist that inspires you most?

Roger Broders was a French illustrator and artist best known for his travel posters promoting tourism destinations in France, typically fashionable beaches of the Côte d'Azur and skiing resorts in the French Alps in the early 20th century.

Maynard Dixon was an American artist whose body of work focused on the American West. He was married for a time to American photographer Dorothea Lange.

3. What is inspiring about your current project?

I love the ocean. All it had to do with was the ocean and I was excited. I love the fluid form of the waves and water. The small scale of our characters to that means a never ending list of fun problems to solve.

4. What was your first job?

I did neighborhood landscaping and was a bag boy at Albertsons.

5. When did you know you wanted to work in animation?

I saw it from an early age with my dad since he had been doing it from when I was really little. He had done it all traditionally. Playing with his animation tools got me interested in art at a young age. In 5/6th grade I knew that being an artist was I ever wanted to be.

Concept art for Paramount Animation's Under The Boardwalk

6. What is one thing you like about working for Paramount Animation?

I'm surrounded by friends and feel like ive grown with the studio and the studio has attracted so many people I love working with. Get to work with the best talent around the world. Location doesn’t matter.

7. Who in your career has helped you to improve and succeed? How did they help you?

I have to say working with Shannon on Madagascar way back when. She helped me through some interesting experiences and helped guide me through the art door maybe earlier than I was ready. Nate Wragg, Art Director and production designer who gave me a home within Dreamworks. I floated between projects until Nate took me under his wing and showed me so much technique with his 2d approach and helped me find what I liked in my style.

8. Which do you prefer to use? [pen, pencil, Wacom pen, or paint brush]

9. What is your favorite Paramount movie?

10. What is your favorite animated movie?

11. Who is your favorite animated character?

12. What is your favorite thing to doodle in the corner of your notebook?

13. What is your favorite zoo animal?

15. Are you a coffee person or tea person?

16. How do you express your creativity in your free time?

17. What do you do when you are feeling a creativity block?

Dawn patrol and surf before work; I write lists/ I stop drawing. If you have to draw give yourself half the time to crack a problem. Something will come from it that can be expanded upon. 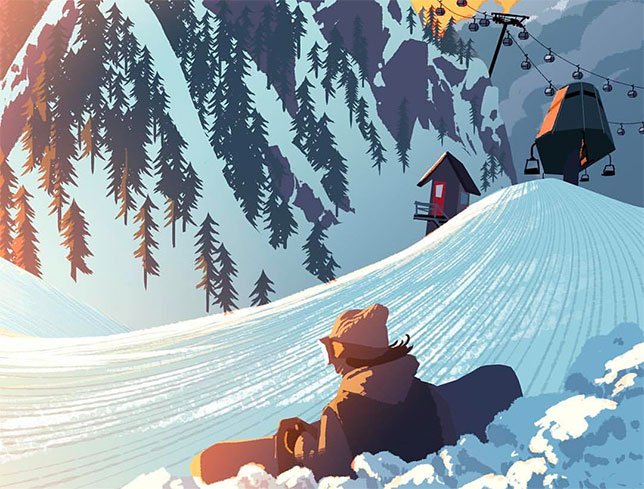 The Three-Body Problem is a science fiction novel by the Chinese writer Liu Cixin. The title refers to the three-body problem in orbital mechanics. It is the first novel of the Remembrance of Earth's Past trilogy, but Chinese readers generally call the whole series The Three-Body Problem. The trilogy's second and third novels are The Dark Forest and Death's End.

19. What is your favorite vacation spot?

20. What is your favorite ice cream flavor?

21. Are you a night person or a morning person?

22. If you could tell your younger self one thing, what would it be?

Seek out and fill a vacuum you see in the world. Be confident that only you need to be a fan of your own work.